Can You Get High on Dicyclomine?

Dicyclomine is a common drug used to treat irritable bowel syndrome, known as IBS. One of the side effects of dicyclomine is an unusual sense that everything–every object and every person–is made out of water. It leads patients to feel like they are floating or drowning while standing still. 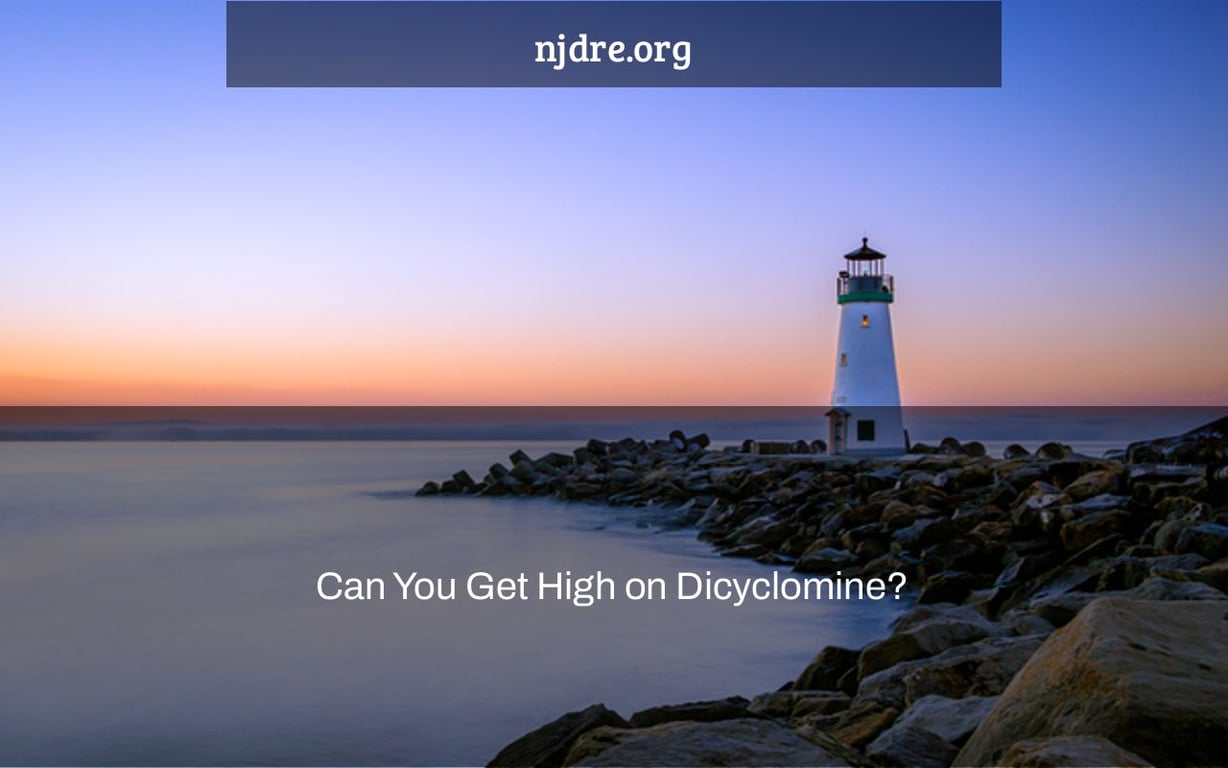 Dicyclomine is one of the most unlikely substances to be taken recreationally. You’d expect that as an IBS (irritable bowel syndrome) drug, it’d be used to treat stomach cramps and infrequent bouts of intestinal pain.

It is, however some users believe that at higher dosages, the Dicyclomine high can cause visual blurriness or hallucinations similar to those experienced during a drug trip. I’d never heard anything like that before, but I decided to investigate.

As previously stated, Dicyclomine is utilized to treat irritable bowel syndrome symptoms such as cramping. The medication is a muscle relaxant that works on the stomach and gastrointestinal tract’s smooth muscles. Dicyclomine is a member of the anticholinergic medication class. These medications are used to treat a variety of ailments, which we’ll go over shortly.

The medicine comes in a variety of brands, but most are similar in that they come in 10 mg capsules and are effective in 10-20 milligram dosages in the great majority of instances. The size of a recreational dosage is usually substantially larger.

The medicine is accessible only by prescription and has a wide range of applications. It was first developed in the 1940s and is well-known for its ability to reduce GI muscular spasms by acting as a non-selective muscle relaxant. It prevents cramping by blocking a substance in the stomach’s smooth muscles.

Those who are considering using Dicyclomine to treat IBS should visit their doctor if they have any allergies, or if they have heart problems, glaucoma, myasthenia gravis, or acid reflux, since these conditions might cause significant medication interactions.

Anticholinergics Have a Use

Dicyclomine and other anticholinergic medications disrupt acetylcholine, a neurotransmitter that helps govern how your body operates.

These medications may be used to treat a variety of conditions, including gastrointestinal difficulties, COPD, asthma, motion sickness, and certain Parkinson’s disease symptoms.

There have been several stories of people Getting drunk on various anticholinergic medicines, but this does not necessarily imply that Dicyclomine is one of them.

What Is the Use of Dicyclomine?

The most typical symptoms are diarrhea, constipation, and stomach discomfort, but it may also induce anxiety, sadness, exhaustion, and a variety of other issues.

There are a variety of drugs available to treat the different symptoms, and Dicyclomine seems to be relatively helpful in treating the pain and muscular difficulties that IBS patients face, however it does come with some adverse effects. While these Consequences are seldom severe, some prescription users claim that the medicine puts them in a mental fog, preventing them from taking it when they need to concentrate.

Anticholinergic medications, such as Dicyclomine, may cause abrupt euphoric and hallucinogenic effects in certain rare circumstances. However, this is far from the norm, raising questions about its usefulness as a persistent recreational drug.

In other words, there’s not much evidence to support that Use for Pleasure of Dicyclomine actually produces a high with any degree of consistency. While some people say Dicyclomine produces a nice buzz, for other people, the drug doesn’t seem to work at all. There’s no telling if the drug will work for you.

How Does Dicyclomine Make You Feel?

To their astonishment, several users have described the drug’s “trippier” effects:

“It took 4 Bentyl and 3 hours to get rid of a stomach spasm that wouldn’t go away. Never experienced this kind a response before, and I’ve never taken that much medication (only ever took 2). /r/drugs, you guys are the experts on all sorts of nonsense, some of which I’ve never heard of…”

“I’d want to be sure I’m not dying when this is happening so I can appreciate it.”

While this response is to some extent pleasurable for the consumer, it deviates from the norm, which generally includes stories like the following:

“Every day, I take dicyclomine and diphenoxylate/atropine. They seem to work, however they dry me up a lot, and the dicyclomine gives me a horrible headache. My insides sometimes feel like sand, my mouth and nose get very dry, and I get awful headaches.”

While there is the possibility of a Dicyclomine high, it is unlikely to occur without repeated high-level dosages.

Dicyclomine in My Opinion

Despite the risks, I decided to test Dicyclomine to see whether it would have any impact on someone like me who didn’t have any IBS symptoms and just wanted to take the medication recreationally.

Knowing it was a long shot, I was able to secure some of the oral capsules and decided to proceed with a large 60 mg dosage in the hopes of seeing any results.

I should have paid attention to their warnings since all I got was a severe case of thirst, followed by a headache, diarrhea, and an overpowering want to lie down.

Normally, I’d give a medicine a second chance to see if increasing the dose may help me get the desired result, but I didn’t want to dehydrate myself, so I gave up on Dicyclomine.

The personal accounts we mentioned range widely, which should come as no surprise to anybody who has ever used prescription drugs. Dicyclomine, like other drugs, has a wide range of effects on various individuals. It may function “as intended” for certain people, in which case it will relax muscles and aid with IBS symptoms.

Others may experience euphoria and a nice Dicyclomine high comparable to that of sedatives. For many, however, it will only cure IBS symptoms on an irregular basis while causing a slew of unpleasant Consequences.

Though the muscle relaxer can ease IBS cramps, it is not always effective. It is even less reliable when trying to use it for recreational purposes. Often, the medication will result in some Consequences, which can include:

“Dizziness, drowsiness, lightheadedness, weakness, blurred vision, dry eyes, dry mouth, nausea, constipation, and abdominal bloating.” In more severe cases, Dicyclomine can interact with other drugs, such as antihistamines, MAOIs, or benzodiazepines, that will increase the severity of the already unpleasant Consequences.

While these Consequences are less common, Dicyclomine has also been reported to cause fainting, difficulty breathing, an irregular heartbeat or psychotic thoughts or actions.

This is a difficult topic to answer since it seems that your mileage may vary with this medicine. Some users described the high as sedative-like with minor psychedelic effects. Others, including as myself, had no high at all and were instead left feeling ill, weary, and thirsty. Meanwhile, some individuals who have been given the medicine are unable to take it since even a tiny amount causes them to get disoriented.

Attempting to utilize Dicyclomine for recreational reasons seems to be much more difficulty than it is worth. While it comes to treating IBS symptoms, the medicine is already hit or miss, and the efficacy rate reduces even more when attempting to obtain that elusive Dicyclomine high.